(You may be interested in a corresponding Hebrew exercise.)

In this example we shall continue working with the exercise from the previous example.

In the previous example, we created an exercise that found Greek verbs in the present indicative and asked the student about the person and number of these verbs. We saw, furthermore, that most verbs are in the third person singular, so we chose to exclude all third person verbs.

So far so good; but suppose we don’t mind that words in the third person occasionally turn up. We might, for example, say that when choosing sentences we insist that they must contain words in the first or second person, but we don’t mind if the chosen sentence units (words) are in the third person if the sentence happens to contain such words. We can do that in this way:

In the “Sentences” tab, remove the check mark next to “Use this for sentence unit selection”. This enables you to use different criteria when choosing sentences and when choosing words within the sentence. Now click the “Sentence Units” tab: 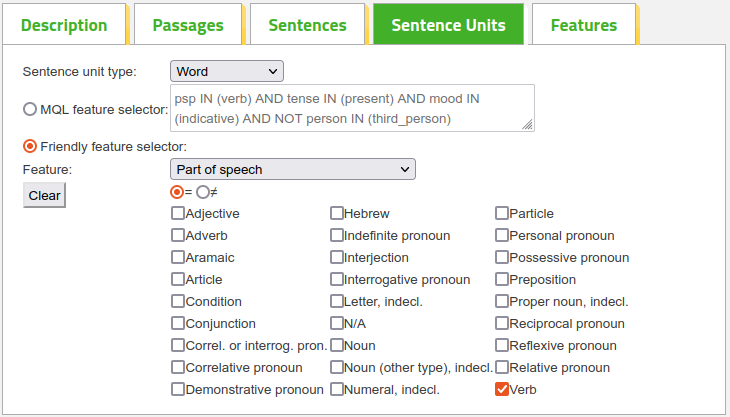 You can see that this tab is very similar to the “Sentences” tab, but the first few lines come in a slightly different order. Depending on how you reached this point, this window may show different things. If you started with an empty exercise, the window will show no selected features. But if you opened the exercise using Edit in the File Manager, the window will show the original content of the sentence choice criteria. This may be a bit confusing, but if you press the “Clear” button, all the criteria in this tab are removed.

Just as you originally did under “Sentences”, you can here choose Part-of-speech=Verb, Mood=Indicative and Tense=Present. But refrain from specifying any requirements about the Person feature. In this way you allow the program to ask about third person verbs if they happen to occur in the chosen sentences.

You can no run the exercise again, and you might get this sentence from Luke 11:8: 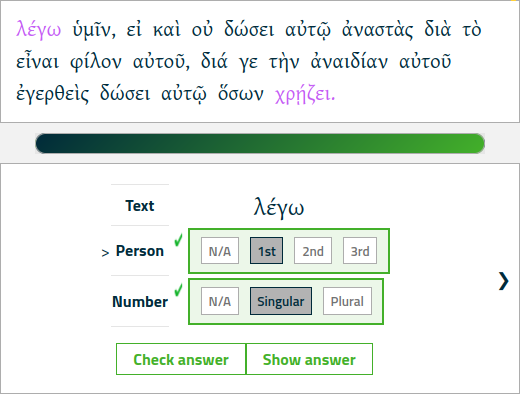 You can see that – as requested – the sentence contains at least one word which is not in the third person; but as the sentence also happens to contain a third person verb (namely, χρῄζει), you are asked about this one as well. (In this example, you need to click the ❯ symbol at the right side of the answer box to see that word.)

But if we want to exclude only the third person singular, the feature selectors we have seen so far will not suffice. We need sentences containing words whose part of speech is verb, whose mood is indicative, whose tense is present, and whose person and number are not simultaneously 3rd and singular. This is a fairly complex rule and you rarely need to specify something as complicated as this. You can specify this in Bible OL, but you need to use the command language MQL.

If you are not interested in more complex sentence choices using MQL, you can skip the rest of this example. But if you want a small taste of how MQL is used, you may return to the “Sentences” tab and select the option “MQL statement to select sentences”:

The system here shows an MQL command that corresponds to the features we have chosen: [word NORETRIEVE psp IN (verb) AND tense IN (present) AND mood IN (indicative) AND NOT person IN (third_person)].* This statement begins with the word “word” which indicates the type of sentence unit we are looking for. The word “NORETRIEVE” has no effect on the choice, but it makes the request run faster. The rest of the command contains our four selection criteria:

The criteria are separated by the word “AND”.

When you run the exercise, most of the sentences will show no difference from before. But occasionally you will come across a sentence such as John 7:25: 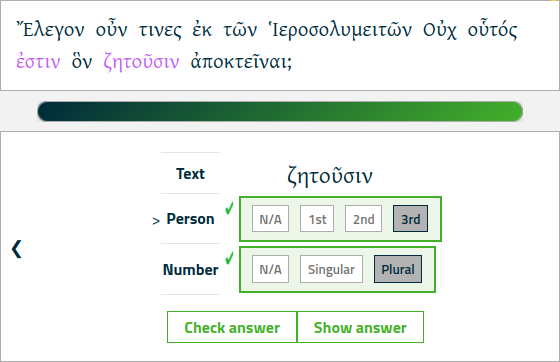 This sentence was chosen because it contains a third person plural verb. (The chosen sentence units are still all verbs in the present indicative; therefore the program also asks about ἐστιν which is third person singular.)