(You may be interested in a corresponding Hebrew exercise.)

We will now look at the exercise called “demo3” in the “Nestle 1904/demo” folder. Click on the number 5 under “...preset passages” for that exercise. The system will show you a random sentence from the specified Bible passages, for example, this one: 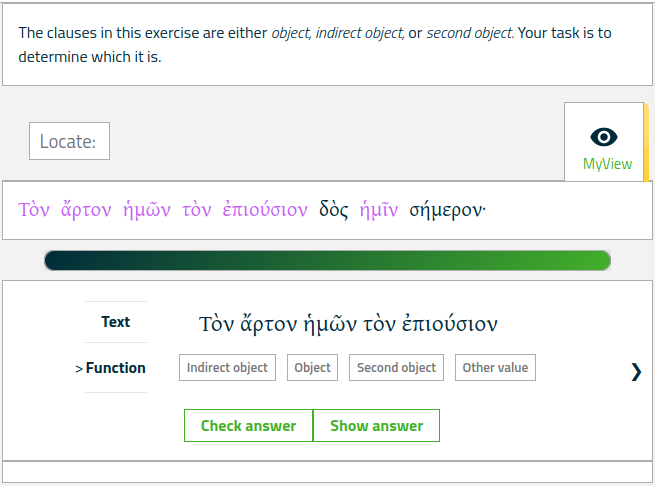 In this exercise the object of the exercise is not words but clauses. Each subquestion presents a level 1 clause, and your task is to identify the function of the clause. The figure above shows a sentence from Matthew 6:11. If you click the “MyView” icon and select Clause level 1 and Show border, the limits of each clause are obvious: 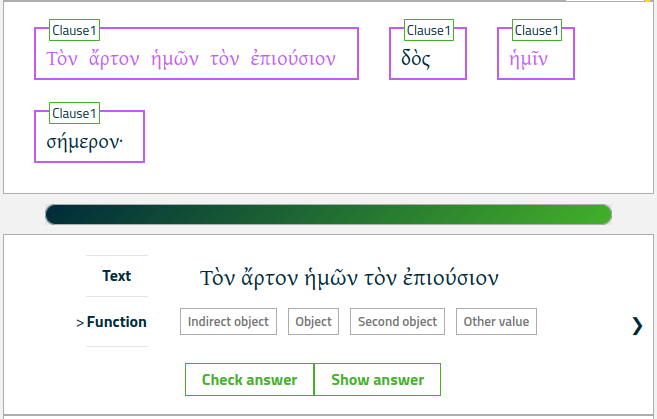 In this example you are asked to consider the function of the indicated clause. The first clause is Τὸν ἄρτον ἡμῶν τὸν ἐπιούσιον, and you must decide if the function of this clause is either object, indirect object, or second object. (The answer Other value is not relevant in this exercise.) Once you have made your choice and checked if it is correct, you can press the ❯ symbol to move on to the next clause in the sentence, which is simply the word ἡμῖν. (The middle clause in the sentence (δὸς) and the last one (σήμερον) have functions that are not covered by this exercise, and for that reason they are not shown in purple and are omitted from the exercise.)